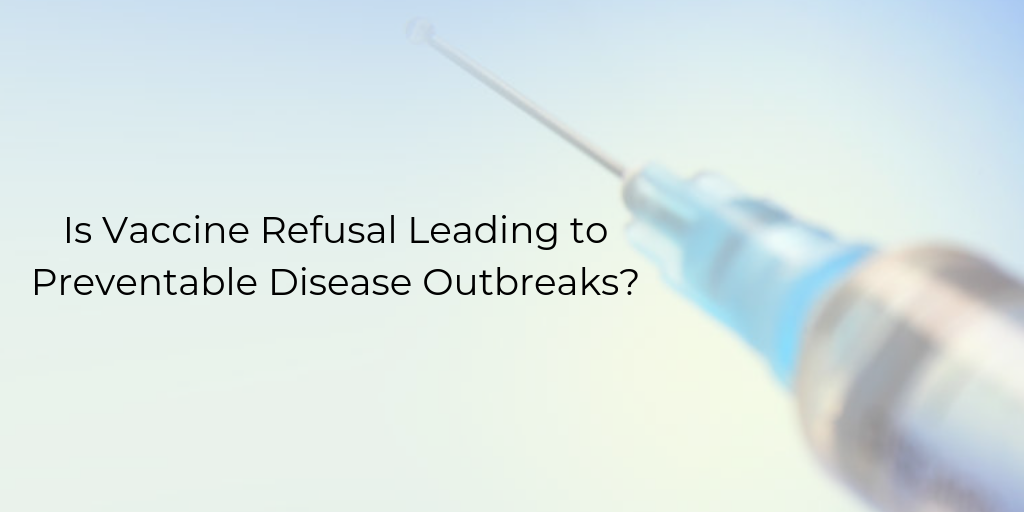 Over the last few years, there has been a trend of parents hesitating to vaccinate their children, delaying their child’s routine immunizations or seeking pure exemption from state vaccine mandates. As the number of unvaccinated children grows, so does the number of cases of vaccine preventable diseases.

Measles was declared eliminated in the United States in 2000, and endemic and epidemic pertussis has been at the lowest point in US history since 1977. Yet in recent years there have been outbreaks of both measles and pertussis. Most of today’s parents don’t even remember diphtheria, mumps, rotavirus, pneumococcal disease, whooping cough, Hib, Rubella, or polio. The question becomes, are these vaccine preventable outbreaks due to intentionally unvaccinated children?

In 2016, Varun K. Phadke, MD, Robert A. Bednarczyk, MS, PhD, Daniel A. Salmon, MPH, PhD, and Saad B. Omer, MBBS, MPH, PhD set out to review published literature to evaluate the association between vaccine delay, refusal, or exemption and the epidemiology of measles and pertussis, two vaccine preventable diseases with recent outbreaks in the United States.

“We identified 18 published measles studies (9 annual summaries and 9 outbreak reports), which described 1416 measles cases (individual age range, 2 weeks-84 years; 178 cases younger than 12 months) and more than half (56.8%) had no history of measles vaccination. Of the 970 measles cases with detailed vaccination data, 574 cases were unvaccinated despite being vaccine eligible and 405 (70.6%) of these had non-medical exemptions (eg, exemptions for religious or philosophical reasons, as opposed to medical contraindications; 41.8% of total). Among 32 reports of pertussis outbreaks, which included 10,609 individuals for whom vaccination status was reported (age range, 10 days-87 years), the 5 largest statewide epidemics had substantial proportions (range, 24%–45%) of unvaccinated or under-vaccinated individuals. However, several pertussis outbreaks also occurred in highly vaccinated populations, indicating waning immunity. Nine reports (describing 12 outbreaks) provided detailed vaccination data on unimmunized cases; among 8 of these outbreaks from 59% through 93% of unvaccinated individuals were intentionally unvaccinated (NCBI).”

In conclusion, many of the US measles cases that occurred after elimination of the disease were due to intentionally unvaccinated children. It is obvious that the trend of vaccine refusal is associated with an increased risk for contracting measles among those who are unvaccinated. Moreover, although pertussis resurgence was partly due to waning immunity and other factors, vaccine refusal still played a part in the outbreaks in certain populations.

Vaccine coverage remains high for most young children, and many childhood vaccine-preventable disease are still highly controlled. However, recent outbreaks of vaccine-preventable diseases are drawing the attention of clinicians, public health officials, politicians, the media, and the public. Vaccine refusal is not something to be ignored.  “Over the past 20 years, rates of non-medical exemptions have steadily increased.10,11 Initially this increase in exemptions was seen only among states that more readily offered personal belief exemptions (ie, those with easier procedures for obtaining such exemptions).10 However, more recently, states with moderately difficult exemption procedures and religious exemptions have experienced increases in rates (NCBI).” To protect the population and keep vaccine-preventable diseases at bay, immunization rates need to remain high.

Providers can do their part by thoroughly educating parents on the benefits of vaccines. Moreover, providers should focus on the proper storage and handling of vaccines to ensure their potency and efficacy. Helmer helps healthcare providers safely store their vaccinations with a wide range of pharmaceutical grade refrigerators and freezers designed specifically for the storage of immunizations. Learn more by following the link below.